The ever kooky, ever lovely Natasha Khan , better known as Bat for Lashes, came to town yesterday and brought along her coterie of musicians, unusual instruments, taxidermied animals and bric-a-brac.

My concert buddy for the evening, the lovely L., and I, arrived at the Bowery with…let’s say, plenty of time to spare. So we hung out in the downstairs lounge, chit-chatting away until about 9 when we figured the opening act might come on. We found a nice left of center spot, about 5 people away from the stage, and settled in awaiting the first set. The musicians came on stage and suddenly there was an eerie silence. It became very church like, that time right before the service is about to begin. The venue was far from full at that point, but those that were there gave all of their attention to the musicians on stage…and then they started to play. And unfortunately quickly lost the crowd.

They were called Lewis and Clarke and hailed from Pennsylvania. The band was made up of a cello player, a viola player, a guitarist that occasionally played his guitar with a bow (who also did double duty on a keyboard) and the lead singer who played acoustic guitar. Their songs were very plaintive and seemed to be about living in economically depressed towns (I could be completely wrong about that – it’s just what jumped to my mind while I was listening to them). Their music reminded me of the best kind of atmospheric music – the kind that rather than being obtrusive, just drifts you off into another realm. The lyrics were alright, but I honestly enjoyed the instrumental intros to the songs much more. I felt like they could stand in their own right, rather than as a piece of a lyrical song. Although I enjoyed it and it seemed as if those right around me enjoyed it as well, the rest of the crowd started to get quite noisy and well, disruptive to the performance which was mostly a quiet sort of musicianship.


The lead singer was a bit too quiet and the viola player looked terrified to be on stage. But they completely came through with a louder song towards the end that rallied the crowd a bit. My main complaint (and my friend’s as well) was that they didn’t really allow a song to end before starting another one, missing out on quite a bit of applause b/c of it. I ended up being confused about whether a song had actually finished and held my applause, only to realize too late that they had started a new song and had meanwhile received zero applause. I know that’s not why they play – solely for the applause – but I’m guessing that it’s a good thing and musicians enjoy being acclaimed. Instead they received some confused stares from audience members like me ;o)

I had been told, when I called up the box office during the day, that the headliner would come on at 10 pm…well, 10 pm came and went and still no Natasha. The roadies seemed to be having the hardest time with setting up all the various instruments and mikes. Some in the crowd (maybe not realizing what was going on) started yelling out ‘Bring her out!’. Yeah, that’d be great. She’ll now sing for us a capella w/o any instruments or amplification ;o)
So everything eventually gets set up and she comes out to many cheers and whistles and generally lustful yells from the crowd ;o) And well, she just looked darling, looking like a cross between a Pierrot, a super hero and a 70’s disco girl. 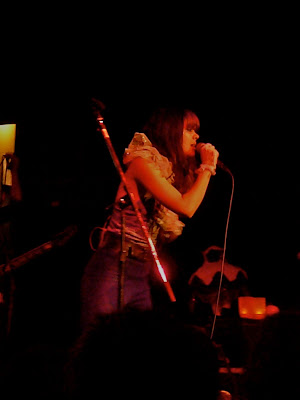 They’d staged the stage much as one would think a quirky (and dark) young girl might have her bedroom arranged. A stuffed crow perching on one of the keyboards, a dancing girl’s legs as the base for a lamp and her corset as the shade, two creepy looking twin angel doll

s (complete with pulsatingly glowing wings), a largish statue of Jesus, a collection of small madonnas – you know, the usual sort of stuff ;o) I’m sure I probably missed some stuff. I ended up way over to the left of the stage, leaning over on the first band’s amps and instrument cases, so I might have missed out on some stuff directly to my left.


She came on very confident and just started belting out her wonders of songs. I’d seen her before, at this same venue coincidentally, and this time she seemed a lot more sure of herself, very confident, like she’d grown up quite a bit since the last show. Natasha started out with a couple of the new songs, which sounded great live, before getting into her first album’s work. 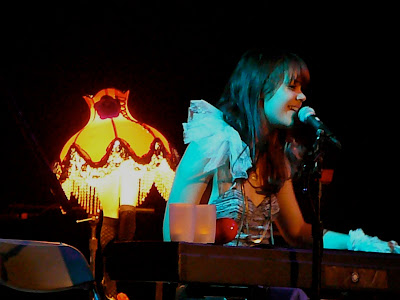 She seemed really happy to be there and her new back up band seem to match her exuberance, particularly the lone male in the band, who played keyboards and whatever that instrument was inside the antiquey-looking box with forged iron handles.

The crowd was definitely appreciative, possibly a little too much, yelling out whoops and hollers even during quieter moments within the first few songs. I actually had to put some tissue paper inside my right ear to keep my ear drum from oh, popping out due to the enthusiasm of the girl next to me ;o) Otherwise the sound was pretty dead on – no problems with it being too loud and I could actually understand most of what was being said by her, in contrast to the show I went to the night before at Webster Hall, where I understood practically nothing of what they said…then again they were Swedish so maybe that’s why I couldn’t understand them ;o) 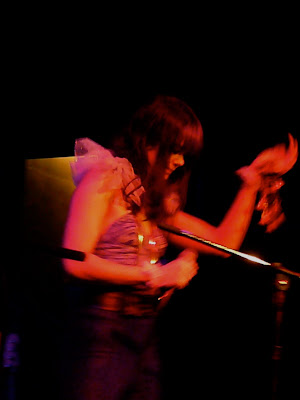 Bat for Lashes played about 30 or 40 minutes and then said ‘Good night New York. Thank you’…or something to that effect :o) And then b/c of my extreme left stage point of view, I was able to see them exiting out the stage and just staying with inches of the doorway, ready to jump back to the stage within a minute or so…which they did. 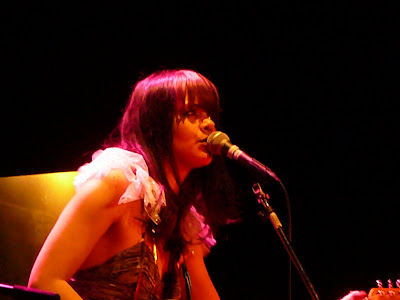 They played another 30 minutes or so, mixing in the new ditties with the slightly older ones. She enchanted the crowd with her rendition of favorites: The Wizard, Priscilla, Sarah. 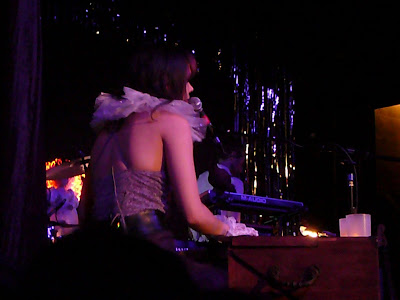 She introduced What’s a Girl to Do by saying that we might know this next song and of course the crowd went mad. She and her guitar player dueted on Horse and I (I think), sitting side by side at Natasha’s keyboard and it was just beautiful to watch.

I wish I remembered more song names as it would make it a whole lot easier to post on this show. But I’m forever bad about that sort of thing.

They finished off the show and were leaving for the night, but the crowd kept on asking for one more song. Natasha obliged and came out and thanked us and said that there was only really one more song they could play and finished out the set.

I thought she was amazing and I loved that she seemed to be enjoying herself so much.
Great show :o)
Posted by alfacinha.in.nyc at 1:00 PM No comments: Links to this post

alfacinha.in.nyc
I go to quite a few concerts each year and always take photos. So I figured I'd start sharing them. And regaling the world (i.e. whichever friends I've forced this link on) with whatever stories I remember about them. P.S. Alfacinha means 'little lettuce' in Portuguese and is also the nickname for someone from Lisbon, i.e. me.